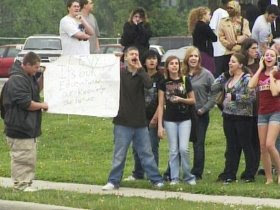 I have been following the debates over a school levy in a school district that borders my own. It is one of the largest districts in the state, encompassing urban and rural areas, inner city and suburbs, old neighborhoods and new developments. This district has an amazing diversity in it's student population. One thing all the students can agree on is the fight over money is a great excuse to ditch class. They stage walk outs with the blessings of both parents and teachers. It is so encouraging to see the unity of multiculturalism working. I hope the district doesn't mind having a lower report card rating for the 2008-2009 school year than my small, rural and small town, mostly middle to lower income district. My district hasn't asked for a levy in over 10 years, and every school building in the district is less than 5 years old. Our new high school will be ready for the kids next school year. Oh, we will also have 2 million dollars more per year, in the bank, over the next 5 years. We do only have one principal and vice principal per school, I don't know how we survive with so little support staff.
Posted by mrs dewiggins at 7:02 PM