Attention! It Is Time! Local Political Clown Races Have Begun! 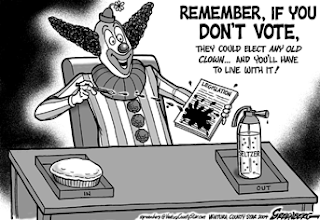 As our local politics start whipping into frenzy, it is time to take a look at the people running for office. I believe it is important to know something about the person that wants to be on the school board, in the trustee seat or city council, or county commissioner.
I have watched a local school district become a national headliner (Bryant Gumbal will be doing interviews this week) because they have taken all extracurricular, i.e. sports and clubs, and busing inside the 2 mile circle away from the kids to extort a vote for more money from the parents. School districts across the country are watching to see if this tactic will work, so they can squeeze more money from their voters with such blackmail. The district has mismanaged money for more than 20 years and was never held accountable until this past year. A levy vote has been put on ballots in November 2008, May 2009, and August 2009 at a taxpayer cost of over $80,000 per election. The people stood up and said "NO" in a loud and clear voice. This has never happened before. A new improved levy is on the November ballot. As the district comes at the voters with messages of "Just listen to us, we know what is best for you because we are smarter than you" the voters are finding corruption they thought could never touch this small suburb community. Voters are looking into the people running for office and the people already entrenched in the political ring and have found links to the National Council of La Raza and ACORN through seemingly innocent "community organizations". This is not a nice term these days as more information comes out about fraud, tax evasion counseling, and embezzlement.
I have found two of the fastest ways to research local candidates are using my county auditor and clerk of courts. I found a person running for township trustee with 2 evictions in 3 year and recent speeding tickets with a different address than what he is using a residence in our township. This guy is not exactly the person I want in charge of our township tax money. I hear people say "Don't judge, it's not nice." Well, when it comes to the people who are going to represent me and make decisions for my money, I'm going to judge! Character and integrity are important now more than ever because we traded those values away when we got lazy and stopped paying attention. We have mayors and city councils across our country trying to take away our 2nd amendment rights and we let them get into office with inaction.
Let us remember the words of one of our most notable First Ladies, "Just Say No!" to the politician’s local and national that look down at voters and have forgotten the reason the office they sit in exists, to serve the voters, not to serve themselves.
Posted by mrs dewiggins at 6:03 AM